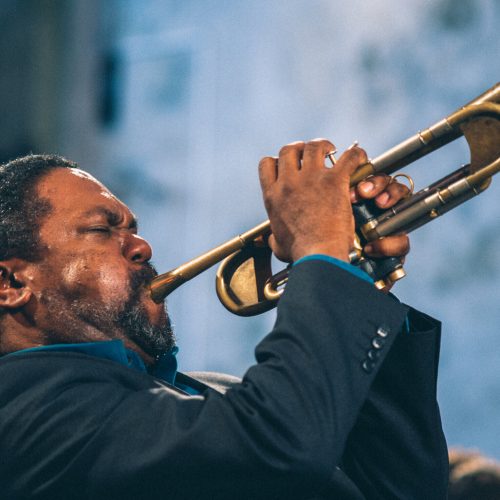 Byron Wallen is ‘one of the most innovative, exciting and original trumpet players alive’ – Jazzwise Magazine. “Four corners” is a musical journey on which Byron explores issues of ancestry, diasporic journey and cultural roots. His music draws inspiration from contemporary and indigenous cultures.

Byron Wallen (b. 1969) was raised in a musical family and as a child studied classical piano, euphonium, trumpet, flute and drums. The trumpet becoming his first-choice instrument, he studied with Peter Ruderforth in London and with Jimmy Owens, Donald Byrd and Jon Faddis in New York in the mid to late 80s. In 1992, Wallen graduated from Sussex University with a degree in psychology, philosophy and mathematics.

He has been playing, live and on record, alongside legendary musicians such as George Benson, Andrew Hill, Chaka Khan, Hugh Masekela, Courtney Pine, Mulatu Astatke, Red Snapper, Jack Dejohnette, Cleveland Watkiss and King Sunny Ade. In 1992, Wallen formed Sound Advice touring the UK and playing in Syria in 1996 and the Czech Republic in 1997. The band also appeared at the North Sea Jazz Festival, gaining critical and audience acclaim.

Wallen is an acclaimed writer and producer whose original scores have been commissioned by the Science Museum; PRS, the BBC, Jerwood Foundation, Southbank Centre, National Theatre, Arts Council, FIFA and Sage Gateshead. He has also created soundscapes for Universal Pictures, Warner Bros and Game of Thrones. His compositions include Live, with Sheron Wray’s dance company,  Langston Hughes Suite, The Trumpet Kings, and Tarot Suite, an extended work of 22 movements, written for a 10-piece band. In 2003, Wallen won the BBC’s Innovation in Jazz award for his third album Indigo. For Byron’s fourth album, Meeting Ground (2007), featuring Gnawa master musician Boujemma Boubul, he received nominations for Best Band and Best Album in the 2007 BBC Jazz Awards and Best Jazz Act in the 2007 MOBO Awards. In 2017, Wallen received the coveted Paul Hamlyn Award for Artists. His band Byron Wallen’s Four Corners released their album PORTRAIT: Reflections on Belonging earlier this year to critical acclaim and was nominated for Jazz Ensemble of the Year for the Parliamentary Jazz Awards 2020.

The music for this project is inspired from the timeless sound of the human soul from all corners of the earth. Landmarks of blues, mode and groove are explored and re-invented. Inspiration for the compositions was also drawn from early Renaissance music, Central and East African rhythm and polyphony and the music of Miles Davis, Wayne Shorter and Thelonius Monk.

“His quartet creates a joyous head of steam. Odd time signatures abound, but Wallen remains funky and accessible.” – The Times

“A fascinating set of his own pieces reflecting the influence of various strands in the evolution of black music.” – Jazz UK

“Danger UXB Wallen is back and he happens to be at the peak of his considerable, creative powers.” – Blues and Soul Music Magazine