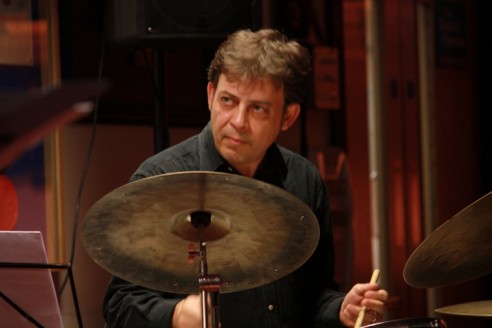 Clark Tracey returns to Leeds with a new line-up of gifted young musicians who have impressed audiences at clubs and festivals with a maturity beyond their years. Aside from Clark, a six-time winner of Best Drums in the British Jazz Awards, Daniel Higham is lead trombone with the National Youth Jazz Orchestra, James Owston was a finalist in the BBC young jazz musician of the year competition and Tom Ridout was another finalist in the same competition in 2016, pianist Will Barry, won the Musicians’ Company Jazz Young Musician award in 2017. From his own experience of over 40 years in jazz, Clark leads them through bebop to post-bop, a highly accessible journey that swings all the way. National Youth Jazz Orchestra director Mark Armstrong competes the band on trumpet.

Son of famous father Stan Tracey, Clark Tracey has been a favourite with Leeds Jazz audiences – he last played for us in 2017 at Seven Arts. His music is rooted in the bebop and hard bop traditions and he has led a number of groups in the classic quintet format of saxophone/trumpet/piano/bass/drums. Clark has played alongside some of the most important artists in jazz at home and abroad – with Americans such as Johnny Griffin, Pharaoh Sanders, John Hicks, George Cables, Bud Shank, Red Rodney, and Scott Hamilton and British musicians including Ronnie Scott, John Surman, Alan Skidmore, Kenny Wheeler, Alan Barnes, Don Weller and Tommy Smith. He has recorded 15 albums as a leader and has been awarded “Best Drums” title six times in the British Jazz Awards, most recently in 2018. Clark continues to play an “Art Blakey” role by filling his bands with promising young players, thereby affording them the all-important exposure to audiences they so richly deserve. Pianists Zoe Rahman and Kit Downes plus Empirical vibraphonist Lewis Wright are just three of the musicians to have passed through the ranks of Tracey’s UK version of the Jazz Messengers. This band follows in that tradition in nurturing and promoting some of our best young jazz talent. Clark’s most recent album with the quintet version of this band, ‘No Doubt’ was released in 2018.

‘Another superb album from a band that sound like they have certainly got it together in the recording studio, but who should really be heard live’ – Review of ‘No Doubt’ by Nick Lea, Jazz Views

“Clark Tracey, an increasingly important catalyst in the development of young musicians, presented his latest quintet in the context of an evening entitled Bebop & Beyond. Often overlooked in these days of modal and ambient jazz, bebop retains its freshness and urgency and the quintet handled it with great assurance, both in terms of adhering to the tight arrangements and in solos which demonstrated a high degree of technique and invention. A solid programme included ‘Hot House’, ‘Groovin’ High’, ‘Anthropology’ and ‘A Night in Tunisia’, giving all the members opportunity to show their capabilities. All the time Clark drove the rhythm section in customary fashion, eliciting solid contributions from pianist Elliott Sansom and bassist James Owston, who showed a prodigious mastery of his instrument. A group of youngsters well worth looking out for”– Jazzwise, February 2018

Tom Ridout is a young Jazz Saxophonist and Recorder player based in London. A graduate of The Royal Academy of Music, Tom is a prolific composer who fronts three especially compelling yet contrasting bands playing his original compositions.He has been a regular member of Clark Tracey’s band and is part of ‘The Ridouts’, a family band with her brother Alex (trumpet), and father Mark (guitar).

Daniel Higham has been playing the trombone since the age of 8 and has been involved in NYJO’s organisation ever since, A fast-rising talent on the instrument Daniel was awarded a scholarship to study jazz at the Royal Academy of Music after completing 4 years in the junior jazz department with Gareth Lockrane and Simon Colam. In January 2020 his own quartet made their debut playing compositions by the iconic bebop pianist Bud Powell.

Will Barry is a pianist, drummer and percussionist from London who graduated from the Royal Academy of Music in 2016 and was winner of the Musicians’ Company Jazz Young Musician Award in 2017.  He is part of numerous projects internationally, most prominently with Phronesis bassist Jasper Høiby’s group ‘Fellow Creatures’, one of the bands with whom he has previously appeared in Sheffield, along with Alex Hitchcok’s bands. With his deft touch and finely honed musicality Will’s playing is a joy to hear. “…sensitive and fluid – a beautiful sound”… Chucho Valdés

Bassist James Owston, studied Jazz at the Royal Birmingham Conservatoire where he was tutored by Arnie Somogyi, Mark Hodgson, Percy Pursglove and Mike Williams amongst others, as well as getting to perform with musicians such as Jeff Williams, Steve Cardenas and Julian Arguelles. In 2017 he joined the Clark Tracey Quintet and appeared on the band’s most recent album. James was a finalist on the 2018 BBC Young Jazz Musician contest. As well as being an active sideman, James leads his own groups, notably ‘The James Owston Mingus Quintet’ that focuses on the compositions and style of the great Charles Mingus, a strong influence for James as a bass player and composer.

Mark Armstrong is a freelance trumpet player, originally from Newcastle and directs the National Youth Jazz Orchestra. He is a past winner of the BBC Big Band Competition arranging prize, and many of his big band compositions can be heard on recent NYJO albums. A recent commission, the Solstice Suite for big band was performed at the 2009 North Sea Jazz Festival. He writes a wide range of arrangements and compositions from choral music to symphony orchestra..