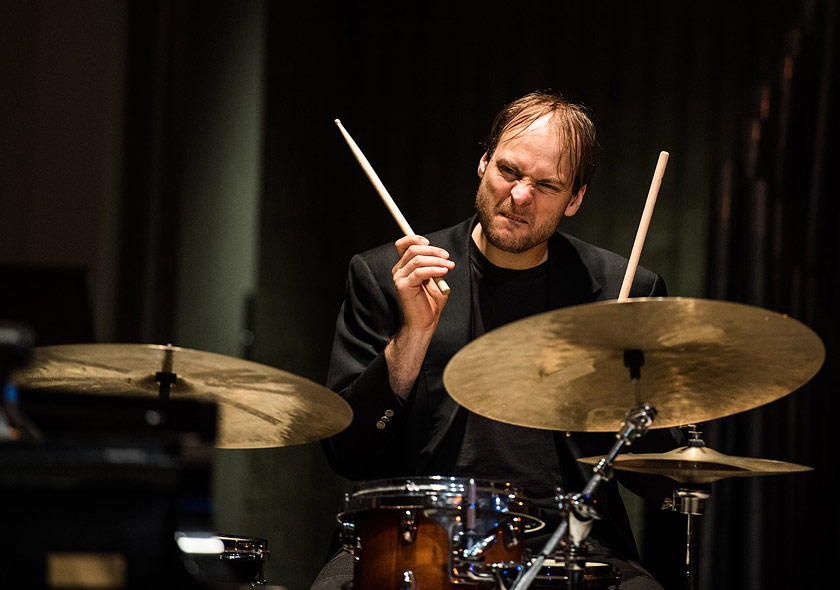 Busy top-notch NYC drummer makes a welcome return visit to Leeds with a trio of guitarist Tom Ollendorff and bassist Conor Chaplin. They deliver sharp, streetwise modern jazz that borrows as much from drum ‘n’ bass as much as it does from pristine ECM and dirty Downtown aesthetics.

“He’s got Rhythm of every variety” ” trickles of rhythm seeping into all the cracks and at regular intervals he changes the rhythm, pouring it out or stoppering it, turning its emphasis around, subdividing or refocusing it and making it follow the melody.”
–Ben Ratliff New York Times

Born on November 13, 1973 in Philadelphia, Ari Hoenig, was exposed at an early age to a variety of musical experiences. His father is a conductor and classical singer, his mother a violinist and pianist. Accordingly, at 4 years of age, Ari began studying the violin and piano. He began playing drums at age twelve, and by age fourteen he was honing his skills with other young jazz musicians at Philly clubs such as Ortlieb’s JazzHaus.

In 2013 Ari and his Quartet won the prestigious BMW Welt (World) award in Munich, an international competition for best band led by a drummer.

In 2016, Ari Released The Pauper and the Magician on AH-HA Records. It features the quintet of Shai Maestro on piano, Gilad Hekselman on guitar, Tivon Pennicott on Sax and Orlando Le Fleming on bass. On this record, Ari explores the link between story telling and jazz by creating a soundtrack to the improvised and sometimes twisted stories he tells his two small children.

In 2018, Ari released a standards record called NY Standard (a tribute to playing standards in New York and in 2019 Conners Days (his first trio record) which features his current trio of Nitai Hershkovits and Or Bareket. Both of these are on the Fresh Sound label. Both of these records have received the highest possible acclaim including glowing endorsements from his grandmother.

In the summer of 2020 Ari was confirmed to record an album of his compositions with a full big band sponsored by University of Wyoming. The compositions have been arranged by Ben Markley. This project will pushed and done sometime in 2021.

Besides his quintet, Ari leads 2 other groups which play his original music. Ari Hoenig Nonet and Trio. The Nonet performs Ari’s original compositions arranged by Noam Wiesenberg and features various high caliber players in the New York area. The trio is with Gilad Hekselman and Orlando le Fleming and has toured extensively in Europe, Japan and South America.

Tom Ollendorff is a jazz guitarist based in London. In 2015 Tom was awarded the Yamaha Scholarship for Outstanding Jazz Musicianship.

Tom has performed with a wide range of highly respected artists and ensembles, including Geoff Simkins, Dave Cliff, Bill McHenry, Jeff Williams and Ari Hoenig, French group EYM and Welsh Singer Megan Thomas. He has appeared at venues and festivals in the UK, France, China, Slovakia, Switzerland and Holland.

​“Tom Ollendorff is one of the world’s finest guitarists. His music is complex yet rooted in melody and feeling” (Gilad Hekselman)

Born in the south west of Ireland and then growing up mostly in Surrey, Conor Chaplin studied at Trinity College of Music, in Greenwich under the tutelage of Simon Purcell, Steve Watts, and others. He is best known currently as part of Mercy Prize nominated group Dinosaur, led by trumpeter-composer Laura Jurd, as well as other contemporary original jazz projects including Flying Machines and WorldService Project. Between these regular projects and other one-off occasions he has had the pleasure of touring extensively throughout the UK, North America, Europe and Asia with diverse artists including Kit Downes, Ben Van Gelder, Reinier Baas, Marius Neset, Thomas Strønen, Bobo Stenson, Harold Mabern, George Garzone, Billy Cobham, Jacob Collier, Jesse Van Ruller, Iain Ballamy, Julian Siegel, Natalie Williams, Ivo Neame, Tony Tixier, Keyon Harrold, Stan Sulzmann, Bobby Wellins and others.