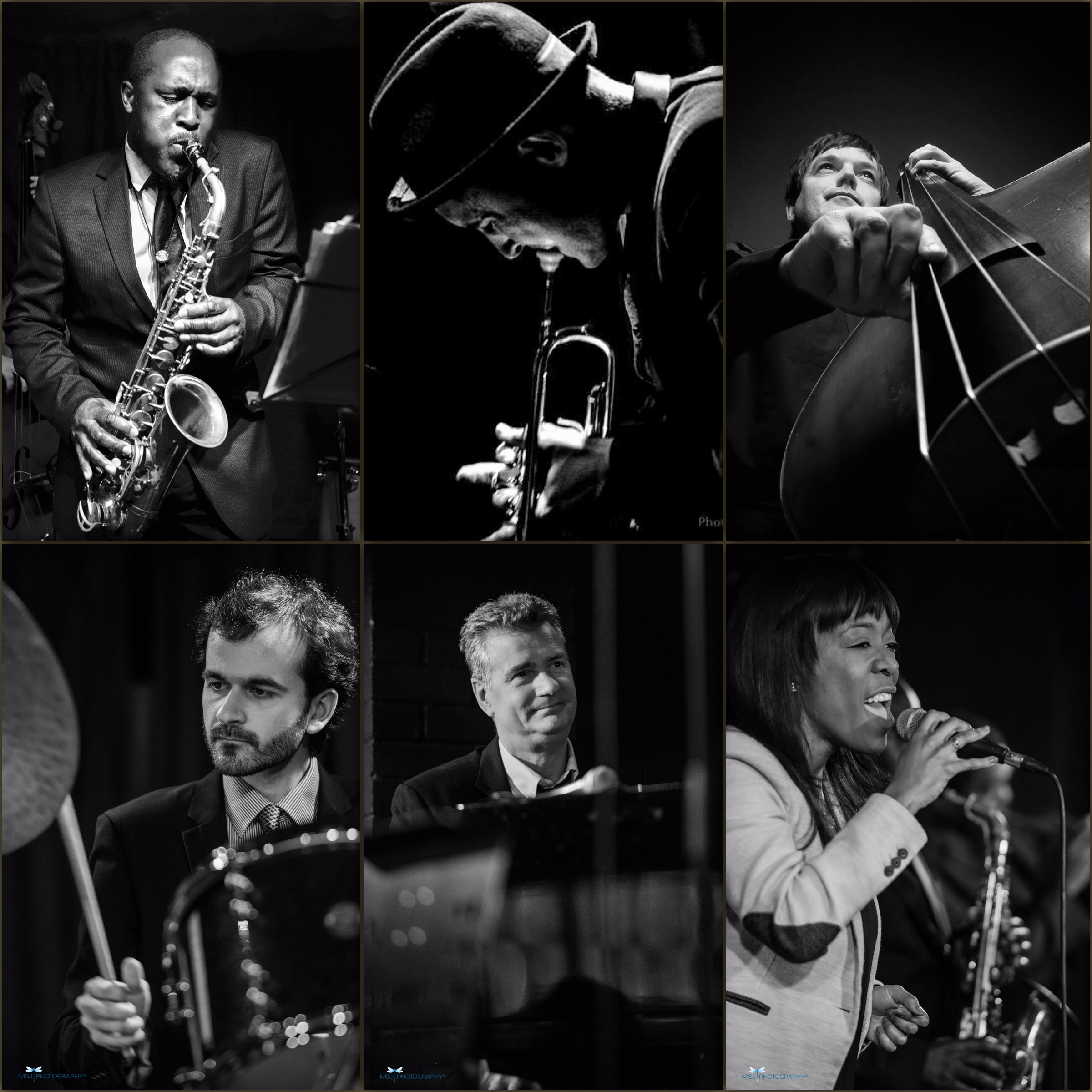 Alto sax master Tony Kofi fronts this loving celebration of the jazz giant Julian ‘Cannnonball’ Adderley.  The group traces the explosive music of Cannonball from his first session as leader in 1955 through work with Miles Davis to the soul-jazz of the late 1960s. Expect Adderley brothers classics like Things Are Getting Better, Sack o’Woe and Mercy, Mercy, Mercy – as well as a guest vocal spot by Deelee Dube exploring the memorable 1961 collaboration with Nancy Wilson. In 2016 Deelee Dube was the first non-American winner of the Sarah Vaughan International Vocal Award.

Julian ‘Cannonball’ Adderley was one of the best-loved figures in post-war jazz. Hailed as ‘the new Bird’, he made historic recordings with Miles Davis and John Coltrane as well as having many crossover hits as a pioneer of soul-jazz. Spanning bebop to jazz-funk, he was a unfailingly inventive and communicative virtuoso. He died on August 8, 1975; 2018 would have been his 90th year.

Tony Kofi won the Best Instrumentalist Award at the 2008 BBC Jazz Awards, Best Ensemble at the 2005 Parliamentary Jazz Awards, Album of the Year at the 2005 BBC Jazz Awards and was nominated for an award MOBO in 2008. Born in Nottingham to West African parents, Tony spent a four-year period at the legendary Berklee College of Music in Boston, USA, on a scholarship music diploma. Since then, he has performed with the World Saxophone Quartet, Clifford Jarvis, Courtney Pine, Donald Byrd, Dr. Lonnie Smith, Eddie Henderson, Abdullah Ibrahim and many others.  Between 2003 and 2004, Tony was an integral part of the Anglo-American Big Band of Andrew Hill and the Sam Rivers Rivbea Orchestra; he has also recorded with Jamaaladeen Tacuma and Ornette Coleman, as well as with his own bands.

Andy Davies is one of London’s top new jazz stars leading his own band the Andy Davies Quartet currently the resident band at the famous Ronnie Scotts’ Wednesday night jam session. He is also much in demand as a solo player and has worked with many leading jazz vocalists such as: Lea Delaria, Ian Shaw, Gwyneth Herbert and Jamie Cullum. With two album releases he has toured across much of Europe and Japan where he performed at the Tokyo Opera House. He has also done pop session work with artists such as Will Young, McFly and appeared on television shows The Paul O’Grady Show and Michael Parkinson Show. According to Dave Gelly of The Observer, “Andy Davies has a lovely trumpet sound, and in the totally acoustic setting of a small club, it blossoms.”

Winner of the 2016 Sarah Vaughan International Jazz Vocal Competition, Deelee Dubé (pronounced Dubé) comes from a stellar African musical lineage.  Deelee’s late father was the famed South African jazz pianist Jabu Nkosi; her grandfather another legendary figure from the country’s music scene, saxophonist and bandleader Zacks (Isaac) Nkosi.  She attended the BRIT School for arts and music, later studying under vocalist Clare Foster, and forming the first of many musical relationships with jazz pianist Roland Perrin.  She established her London reputation with tenor saxophonist Renato D’Aiello at Ronnie Scott’s Acoustic Jazz Lounge. A songwriter as well as a singer, Deelee has had her work reach the semi-finals of the UK Song writing (UKSC) Contest.  Deelee is also a poet, and her work has been published in Write & Shine(Poetry Now Young Writers Book, 1995) and the Book of Dreams (United Press, 2010).  Her debut album, on Concord records, will be released in 2018.

Alex Webb is a songwriter, arranger and pianist; His songs have been recorded by jazz singers China Moses, Mina Agossi, Sandra Nkake, Liane Carroll, Allan Harris, Alexia Gardner and Alexander Stewart, among others. He has created a number of ‘words-and-music’ productions, including ‘Lush Life’ (about composer / arranger Billy Strayhorn), ‘Charlie Parker on Dial’ and ‘Cafe Society Swing’.  ‘Cafe Society Swing’ has enjoyed two theatre runs in London and one in New York, where it starred Charenee Wade, Allan Harris and Cyrille Aimée and received a New York Times ‘Critic’s Pick’.  He recently created a musical about Lena Horne, ‘Stormy’ written with actress Camilla Beeput.

Alfonso Vitale was born in 1991 in Messina, Italy. He started playing the drums at the age of three and became a regular fixture at local jazz club ‘La Sosta’, sitting in with visiting veteran stars like Bobby Watson, Kenny Barron, Buster Williams, Steve Swallow and others.  In 2013 he graduated from the Conservatoire A. Corelli with a degree in classical percussion.  Soon after moving to the UK, he became a regular sideman with tenor saxophonist Renato D’Aiello at Ronnie Scott’s Acoustic Jazz Lounge and found a comfortable footing on the London scene.  More recently Alfonso returned from a three months sabbatical in the Big Apple, New York City, honing and extending his skills as an exponent of his stylistic passion in the style of the old jazz masters.

Andrew Cleyndert began playing bass while still at school and, on leaving in 1981, immediately embarked on a musical career backing jazzmen such as Peter King and Art Farmer as house bassist in a jazz club in Manchester. On moving to London he began playing with Bobby Wellins and the Don Weller/Bryan Spring Quartet. Clark Tracey and Iain Ballamy and quickly established himself on the jazz scene as well as touring with such US visitors as Bobby Watson, Bud Shank, Red Rodney Charlie Rouse, Benny Green, Junior Mance, and the European quartet of Gene Harris.  In the noughties he started his own record label promoting musicians such as Stan Tracey, Junior Mance, Bobby Wellins, Martin Drew, Peter King, Don Weller, Karen Sharpe and to date has released almost 50 albums as well as producing countless others. He was also a member of the Ronnie Scott Sextet/ Quartet for a number of years, and was long-standing bassist for the much-missed Stan Tracey.

‘Kicking off with the big boys on Friday, Toni Kofi’s Portrait of Cannonball, with the absurdly undervalued trumpet of Andy Davies … with the rhythm section of Alex Webb, Andy Cleyndert and Alfonso Vitale really kicking in …  [and] a couple of songs by Delee Dube, sounding like a very young Sarah Vaughan’– London Jazz News

‘Kofi’s improvising has an arrestingly raw power’ – The Guardian

Review by Brian Blain (London Jazz News) of gig at Lauderdale House 2018:   “Although I thought that alto giant Tony Kofi’s Portrait of Cannonball was a great opener at this year’s Swanage Festival in July, a few gigs down the line to polish things up plus a packed house, of all ages, in a smaller intimate space came together to create that magic bond between band and audience. It was an absolute blast, one of the most exciting gigs of the year, surely?

The structure of the show helps of course – nothing like intelligent, well-delivered words to connect, with pianist Alex Webb and Kofi himself giving short narratives on stages in Adderley’s career and the wide range of great players he worked with, from Coltrane to Zawinul. Miles Davis was one, and his gift (most unusual) of Nardis inspired beautiful, restrained and melodic invention from the magnificent Byron Wallen(tpt), in complete contrast to his earlier contributions to Gigi Gryce’s Minority and Cannon’s own Things are Getting Better which threatened to crack the ceiling, if not actually raise the roof.

Like Wallen, Tony Kofi is a big, big player, someone who has worked in much further ‘out’ areas, such as the World Saxophone Quartet, alongside the late Hamiet Bluett, and that freer experience seems to have created a much more passionate voice, which even encouraged some ferocious circular breathing on, I think, Sam Jones’s Del Sasser. Throughout, it was wonderful to hear these slightly free elements brought to bear on Cannonball’s world of swing and melodic lines. You got the feeling that he was getting massive enjoyment from the whole thing and that this is more than just a ‘project to get gigs’.

None of this would work without a really good rhythm section and Alex Webb, drummer Alfonso Vitale – a quiet storm – and especially bassist Andy Cleyndert, the root of the grooves and the still vibing veteran of a million dates with the cream of the UK’s modern mainstream players, was it, a brilliant all-round package. But for me, there was just one more thrill – an encounter with an almost unknown new talent.After the storm of Del Sasser, halfway through the first set, Tony introduced the band’s ‘special guest’, Deelee Dubé, informing us that she was the first English singer to have won the International Sarah Vaughan Prize, judged by a panel of heavyweights including Christian McBride. Easing her way in to a Jobim song, Once I Loved, she slotted in perfectly with the two frontline horns, and though clearly just a tad nervous she revealed a voice of depth and range which navigated a not particularly easy tune with conviction and style.

But it was in the second set, when she went for the Nancy Wilson classic Never Will I Marry that sparks began to fly. This a song that was always previously a vehicle for the likes of Garland and Streisand until Wilson got to grips with it and showed the world what a jazz singer could do with it. At Lauderdale, Dubé was not overshadowed by anyone in this illustrious company, and by the final Work Song she was really flying, along with the whole team It was a marvellous surprise and a real lift to be in on the discovery of a brilliant new voice surrounded by jazz riches of the highest kind.”

Support (8-8.30pm is from Yaatri is a five piece jazz crossover quintet formed in Leeds in 2018. Their blend of complex composition and ethereal soundscapes captivates the heart as well as the mind. Influenced by the emotive quality of the Scandinavian jazz tradition, the momentum of the rhythms of India and the energy of rock and roll, their music has a strong sense of purpose and journey.