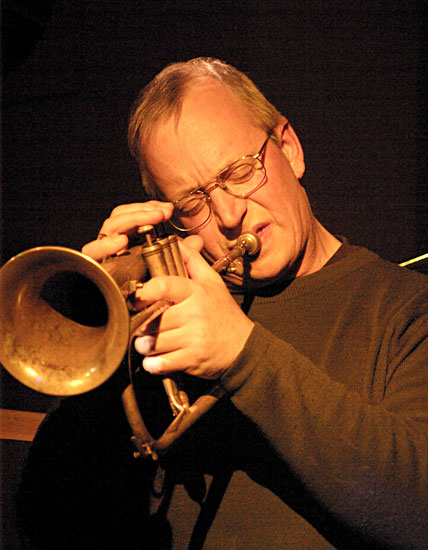 Bar in Park Lane Roundhay Leeds LS8 2EJ 8pm 21 June
Mark is one of the top trumpeters in the UK, working internationally and with a musical spectrum from Humphrey Lyttelton to Matt Monro to Gladys Knight and the Pips. He is well known as a jazz player working as a member of the Johnny Dankworth Big Band, a tour with George Russell’s Living Time Orchestra. Guesting with the BBC Big Band as a section member and jazz soloist working with Canadian Band leader, Rob McConnell and Bobby Shew amongst many top jazz names.  Playing with the great drummer Elvin Jones at the Soho Jazz Festival was a wonderful memory.

Mark is now concentrating on jazz tuition working as senior Lecturer at Leeds College of Music and devoting his time to playing jazz with the intention of making a duet album with a number of prominent UK jazz artists. As part of this, he spent a week studying with Bobby Shew learning his methods of teaching embouchure development. An album ‘The Quiet Band’, ‘Lullabies and Dreams’ is due out late 2014 featuring Mark as soloist.

He has assembled an all star band to play at the Bar on Park Lane – besides Mark on trumpet there is Kevin Holbrough trombone, Les Chisnell piano, Jack Garsise double bass and Dave Walsh drums – the “A” team”!