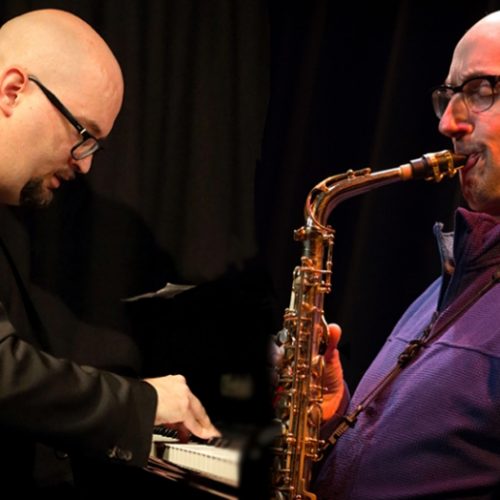 A superb quartet fronted by two of the most original improvisers on either side of the Atlantic. US pianist Ethan Iverson (one of New York’s finest and most innovative pianists, best known for his work as a member of Bad Plus) and Britain’s Martin Speake on sax – reviving a partnership with that goes back over a decade. Expect dazzling originality also from Calum Gourlay on bass and Jorge Rossy, drums.

US-born pianist and composer Ethan Iverson is probably best known as a founding member of the iconic New York based band The Bad Plus, a game-changing collective who the New York Times described as “…better than anyone at melding the sensibilities of post-60’s jazz and indie rock.” During his 17-year tenure TBP performed in venues as diverse as the Village Vanguard and Carnegie Hall and collaborated with the likes of Joshua Redman, Bill Frisell and the Mark Morris Dance Group. A powerful yet thoughtful and lyrical player, Ethan has also appeared with International jazz artists of the calibre of Billy Hart, Ron Carter Tom Harrell, Victor Lewis, Chris Potter and Ravi Coltrane. As a composer, in 2017 he scored “Pepperland” for the Mark Morris Dance Group and in spring 2018 premiered Concerto to Scale with the American Composers Orchestra. This is a rare opportunity to hear Ethan in concert outside of London – and with arguably the UK’s finest altoist, backed by two top-notch musicians in Calum Gourlay and Jeff Williams.

“pianist Ethan Iverson….letting [his] distinctive attributes shine while also interacting at the highest levels of listening and invention”… Downbeat

“Ethan Iverson is….endlessly resourceful….there’s never a moment when he isn’t either launching a new idea or expanding on one”… The Guardian

Martin Speake is one of the UK’s most prominent alto sax players. An Award-winning musician Martin has been at the forefront of the UK jazz scene since the mid 80’s. His projects are many and diverse and include personal interpretations of the music of Charlie Parker, free improvising, playing standards with his quartet and Indian music with Dharambir Singh and Sarvar Sabri. He has recorded 23 CDs under his own name, including the internationally acclaimed ECM release Change Of Heart with Paul Motian, Bobo Stenson and Mick Hutton and includes work with the likes of Loose Tubes, Stan Tracey, Django Bates, The Style Council and Airto Moreira on a massive cv. Martin is also a committed jazz educator, teaching at Trinity Laban Conservatoire, the Royal Academy of Music and the Guildhall School of Music and Drama.

Martin and Ethan met in Canada at the Banff Centre for the Arts in 1990, and theirs has been an ongoing, though sporadic collaboration. They recorded the CD “My Ideal” in 2002 for Basho Records; fifteen years later, their quartet album “Intention” with Martin’s compositions plus arrangements of Charlie Parker’s ‘Charlie’s Wig’ and the standard ‘Dancing In The Dark’ (Ubuntu Music) was released. The combination of Ethan’s searching, sophisticated piano playing and Martin’s fluent and creative sax work produces wonderful music of the highest calibre.

Support (8-8.30pm) is from Will Powell Trio with Will on guitar, Sam Jackson bass and Josh Smout Drums