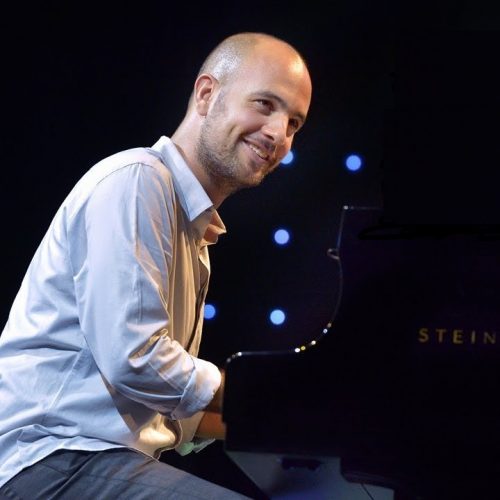 Shai Maestro is one of the most promising and talented pianists of his generation. Based in New York, he has made his name touring with bassist Avashai Cohen but since 2011 he has shaped a strong and unique personal identity of his own making his trio one of the most powerful and harmonious groups in the jazz today.

Shai’s fifth album and first album for the famous label ECM, produced by Manfred Eicher, was released this year – “The Dream Thief”, featuring the gifted pianist fronting his superlative trio with young and fellow Israeli Ofri Nehemya on drums and Peruvian bassist Jorge Roeder – the trio you will see in Leeds.

Maestro’s intuitions proved right: just a few weeks later, he received a phone call from bassist Avishai Cohen, known for his long-time collaboration with Chick Corea as well as for his successful band-leading career. The bassist called to invite Maestro to join the Avishai Cohen Trio with drummer Mark Guiliana. Maestro recorded four albums with the Avishai Cohen Trio, including two on Blue Note Records: Gently Disturbed, Sensitive Hours, Aurora, and Seven Seas. The trio toured the world and played at some of the world’s most renowned venues and festivals.
In July 2010, Maestro formed his own trio and just a few months later, recorded their well-received first album, ‘Shai Maestro Trio’, for the French label Laborie Jazz. The trio began an intense schedule of touring the world, playing up to 80 concerts a year and sharing stages with groups led by Chick Corea, Tigran Hamasyan, Esperanza Spalding, and Diana Krall. In 2012, the trio released their second album for Laborie Jazz, entitled ‘The Road to Ithaca’, making an even more personal and intimate statement, going back to the essence of their being: unedited and raw.

2018 marked an important year for Shai, signing with major jazz label ECM and recording his first album “The Dream Thief” there, featuring his trio, but also him as a solo-pianist. Introspective, lyrical, virtuose and differentiated. The fall of 2018 saw Shai perform in more than 15 countries worldwide, including most of Europe, Japan and the USA.

The first part of the concert will celebrate an exciting new collaboration between pianist Frank Harrison and vocalist Brigitte Beraha.

Harrison is one of the leading jazz pianists of his generation, know for his ‘lucid, intelligent, spacious and beautifully controlled’ (Jazzwise) playing. Beraha is now recognised as one of the most versatile and exciting vocalists on the UK jazz scene, with ‘Norma Winstone-like subtlety and precision’ (Guardian). Together, their music is melodic, romantic and understated, sometimes playful and sometimes dark but always striving for beauty.