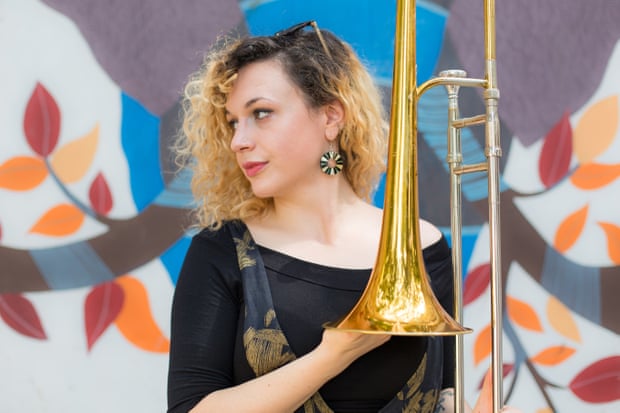 The trombone is perhaps an unusual instrument to see centre stage but it’s a hugely underrated one. Its range – from pillowy breath tones to the crystalline shards of a full blast – means that the instrument has been favoured by musicians ranging from 60s jazz-funk pioneer Pee Wee Ellis to 80s classical experimenter Peter Zummo.

With the London jazz scene blooming, it seems fitting that a new generation of trombonists should now come to the fore. As a composer as much as a trombonist, Rosie Turton is one of the up and coming voices on the UK jazz scene. She expresses herself through a variety of different musical outlets, from composing and playing with septet “Nerija”, recording with “Jitwam” and playing with Hollie Cook. After exploring the eclectic music scenes from London and New York to the Himalayas of India her new band Rosie’s ‘5ives’ have released an album with Jazz Re:Freshed that showcases her individual and unique voice as a performer, composer and producer

“There are ragas, hip-hop and plenty of trombone on the debut from this leading light of London’s new jazz scene” – The Guardian