JazzLeeds is a major UK jazz promoter. Starting in 2007 we now run weekly concerts, jazz festivals, popular community jazz cafés and jazz workshops. Since May 2021 we have been running regular live events again – over 50 gigs so far. We’re now looking forward to the future and have  a major international jazz festival planned for 2023. We put diversity very much at the heart of our approach and are keen to promote high quality, accessible jazz in friendly welcoming environments.

As a registered charity, our activities are managed by a Board of Trustees, who play a crucial role in making sure the organisation manages its funds properly and fulfils its role of promoting gigs that showcase the best of local, UK and international jazz.

We are currently looking to recruit two new members to our Trustee Board. We are particularly keen to recruit people who have skills and experience in any of the following areas:

Specialist skills aren’t essential however: a love for jazz is the foremost requirement. Enthusiastic newcomers will be made very welcome, and being a Board member is itself an exciting learning experience

The role is a voluntary one. You will be expected to attend Board meetings (normally around 4 a year, held in North Leeds in the evening) and help out at some of our regular gigs. In return you will be able to shape our future activities and get to meet some of the most exciting jazz musicians around. Check out our website www.jazzleeds.org.uk to get an idea of our current programme.

If you are interested in joining us then please send an email by 12 November 2021 to [email protected] giving us an idea of your skills and experience and how you would like to be involved. We’ll get in touch with you during the latter part of November 2021. For more information contact Steve Crocker. Chair of Jazz Leeds Trustee Board on 07544 352594

JazzLeeds and Wakefield Jazz are offering a joint one year traineeship for someone who wishes to gain experience in running a jazz club. Training will be offered to the successful candidate. No age barrier to potential candidates – the only qualification is a love of jazz and a wish to promote the music through events, concerts and community activities. The position is paid, and part time and is one of four such posts on offer throughout the North of England. The scheme has been made possible by funding through Arts Council England and is managed through the Northern Jazz Promoter network.

Please take a moment to read the results of our recent audience survey. We noted what you said about not wanting to attend inside events and instead ran regular outside live jazz in the Seven Arts courtyard on Sundays 1.30-3.30pm during the summer and autumn of both 2020 and 2021.

Jazzleeds annual report: this is  the annual chair’s report of the JazzLeeds charity for the year Oct 2019 to Sept 2020, presented and approved by the JazzLeeds Trustees on May 6 2021
Click here

British saxman Don Weller has died on 30 May 2020 after a long illness aged 79. He was a great favourite amongst jazz fans – he memorably appeared for us in Leeds at Seven Arts on 15 Dec 2009 with his good friend Bobby Wellins on tenor sax (picture is by Colin Watson).

When I lived in Sheffield during the 1980’s I arranged for Don to play at many of the venues in that city – including his own quartets, quintets, Major Surgery , Rocket 88 and several bands led by pianist Stan Tracey. Here’s music from a couple of those concerts.

The first is Don with Bobby Wellins Quartet on tenor saxes, Errol Clarke piano, Andy Clyndert on bass and Bryan Spring 12/10/83 and “Promised Land”. This was a concert featured in the BBC2 Jazz at the Leadmill series broadcast by Charles Fox on Jazz Today on BBC radio 3, 15/04/84 https://www.youtube.com/watch?v=qTD5BSGyw54

The second is an hour long performance from the Radio Hallam Airwaves Jazz festival at the Leadmill Sheffield on 28/11/84 – a quartet with Errol Clarke piano, Andy Clyndert on bass and Bryan Spring. I was the jazz presenter on Radio Hallam at the time so the introduction at the start is by a much younger me! The tunes he played were were “Sudden Discomfort, Softly as in a morning Sunrise, Polka Dots and Moonbeams, The Red Zinger and one other unnamed tune. The original broadcast was on my Jazz Unlimited show 8 Dec 1984 (https://www.jazzleeds.org.uk/wp-content/uploads/2020/06/DON-WELLER-BRYAN-SPRING-QUARTET.mp3)

JazzLeeds appoints New Trustees to Board

Jazz Leeds is pleased to announce it is appointing two new Trustees to the Board of Trustees.

-Ben Gilbert is a jazz piano player, who trained at Newcastle and has been involved in running workshops and classes at the Sage. He lectured in creative thinking in music at St Mary’s University College in Twickenham and has now moved to Leeds. He has had a great deal of performance experience.

-Karen Gourlay is Head of the Junior and Short Courses Departments at Leeds College of Music working with all age groups from 8-80. She’s worked with Ronnie Scotts Charitable Foundation in a project promoting widening participation in jazz.

Thanks for your involvement! These two Trustees will join Jamil Sheriff, Steve Crocker, Steve Ross and Rosemary Holmes on the Jazz Leeds

JazzLeeds are a registered charity and our activities are managed by a Board of Trustees. We are now seeking to recruit a number of new Board members to help future developments. We are particularly keen to recruit people who have skills and experience in any of the following areas:

Details of this voluntary role and how to apply are here on the Artsjobs website – http://www.artsjobs.org.uk/arts-job/post/board-members-87/

Get a new year’s present – a Jazz Leeds season ticket!

This festive season, how about a present of a Spring Jazz Leeds season ticket for the jazz fan in your life? They’ll get to see these seven superb concerts, have some amazing nights out, save money and support JazzLeeds! 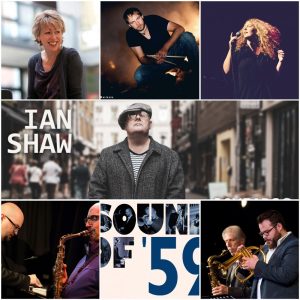 So the captains and the queens have left the stage and the Women Jazz Leaders season comes to an end. Suggested by Steve, he and I worked together to find 11 women-led bands to disprove the commonly if unconsciously held belief in many jazz fans and male players that women musicians aren’t as good. I think Steve was also motivated to stop me constantly banging on about the lack of headlined women musicians as leaders or soloists.

Well, was it all worth it? We’d all ages of women, from 19 to those who won’t see 60 again. We’d women musicians from England, Scotland, Wales, Denmark, Italy, Canada and just down the road. They offered us all combinations from a duo to an 18-piece band. They played tenor, trombone, trumpet, alto, soprano, baritone, piano, bass, guitar, harp. We’d bands in their infancy, we’d long-established. What we got throughout without a shadow of doubt was tremendous music, hugely varied in style from the “traditional modern” jazz line-ups and style of playing of such as Kalpadruma, Kathrine Windfeld, ARQ,  and Karen Sharp to the downright quirky offerings of Kim Macari, Rosie Turton and Maria Chiara Argirò.

I can’t say for sure what the financial return was on these gigs – gates were always better than expected, but relatively unknown players (making my point!) don’t attract big numbers precisely because they’re not headlined enough. Nor will they get the fans in until they’ve been given more such opportunities. We’ve done that here, in a small way. The Women Jazz Leaders season won’t necessarily take the jazz world by storm, or change anything overnight, but it was a unique season which we don’t believe the jazz world has seen organised in this country before. We intend to publicise it now across the country, to the many other jazz societies, telling them why we did it, how it went, what it proved and giving them the simple message “It worked for us. Why not try it yourself?”

I really hope they do.

Let us know what you thought of it, how it could be improved, whom you preferred and would like to hear again. Our thanks to ALL of you who played and attended and made it work. Maybe again, in 2021? 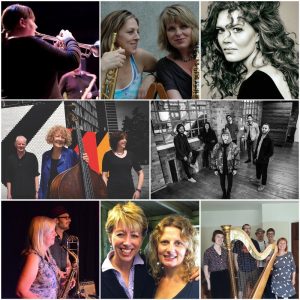 Workshops have started again and run fortnightly at Meanwood Valley Urban Farm (Barn Sugar Well Rd, Leeds LS7 2QG) on Sunday mornings, 10:30am-12:30pm (future dates include: 22nd May and 12th June). Cost per session: £10/8. All instruments and standards welcome – all you need is a wish to learn how to improvise and play jazz tunes. There is a piano available and a drum kit, otherwise please bring your instruments. Limited spaces available. To join – contact the tutor Dominic Moore.